Discerning the Principles of God 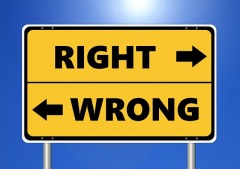 Knowing which principles in God’s Word to apply to given situations can be tricky. If we do not get our application from the Holy Spirit, we can end up speaking or acting in the flesh.

We see conflict over how to walk out the Word all the time. While some things are very clear-cut in Scripture, others are not. Hence, people frequently misuse the Bible to support their opinion or what they want to do. Believers really seem to struggle with this. It comes out loud and clear in real-life conversations. People are willing to fight to the death over their opinion, using Scripture to back it up – often erroneously.

An example recently in the news was the issue of separating children from their parents at the border. Somehow, that became a fight between those who wanted to apply the Romans 13 “obey the law” principle and those who were more concerned about the “compassion and caring for the helpless” principle.

How do we figure out which principle to apply and when? Like with so many other things, it is about discernment — in this case, discovering God’s heart case by case. That may sound like situation ethics, but it is not.

Situation ethics, as defined at Wikipedia, “takes into account the particular context of an act when evaluating it ethically, rather than judging it according to absolute moral standards.” Sympathy toward so-called mercy killing is one example of where situation ethics will take us. God’s moral standards, however, do remain eternally absolute, so we can’t bend those for our convenience or personal desires, no matter how convincing our logic may be.

Many decisions and viewpoints do not involve violating an absolute moral standard. For those, there can be multiple principles in Scripture to be considered. We need to find out, for each set of circumstances, which principle is the correct one to apply.

The apostle Paul’s comment in 2 Corinthians 3:4-6 gives us a clue as to how this works: “And this is the trust we have through Christ toward God: we are not sufficient in ourselves to think anything as of ourselves; but our sufficiency is of God, Who also has made us able ministers of the new testament — not of the letter [of the law], but of the Spirit: for the letter kills, but the Spirit gives life.”

We are not competent through our intellect alone to discern how to apply the written Word of God. When we try to do that, we will often miss the mark. Instead, we must ask the Holy Spirit to illumine His Word and lead us to correct solutions. This is certainly part of what “rightly dividing the word of truth” (2 Timothy 2:15) is about.

Jesus frequently shocked the religious leaders of His day by doing and saying things which they viewed as flagrant violation of God’s commands. He took them to task about their rigid understanding of the law and showed them what God’s intent was in it. In the process, He challenged them to look into their heart attitudes. The religious leaders, not understanding that they were contending with God Himself (Who certainly would have known what His own Word said), thought Jesus was a dangerous heretic.

So, how do we correctly discern and apply God’s principles? It requires asking Him for His input, which can take time to receive. We need to be careful not to express opinions too quickly, but to seek His counsel first. We can consider what other believers are saying, and ask God to give us His input on whether their take is correct. I often ask, “Lord, what about this? Will You give me something from Your Word which speaks to it?” Then I wait for a thought from the Scriptures to come to mind.

I also measure whatever principle I am weighing against 1 Corinthians 13 — the love test. If we are applying the Bible correctly, it will not violate other parts of itself, such as this chapter.

The Lord is most willing to help us discern His principles correctly. He has promised, “If any of you lacks wisdom, let him ask it of God, Who gives generously to all without reproach, and it will be given to him” (James 1:5). Our part is to wait upon Him patiently, expecting that He will truly help us. The more we are willing to do this, the more we will become skilled at correctly discerning and applying His Word.

The Names of God, by Lee Ann Rubsam

This site uses Akismet to reduce spam. Learn how your comment data is processed.